Who can identify these theme songs? Name that tune!
Notice that these are all old -- the new theme songs aren’t as uke friendly.

If you had to come up with a theme song for your life, what would it be?

The psalmist, in spite of the fact that he has never seen an episode of Gilligan’s Island, homes in on the idea of musical themes when describing his take on God’s message -- his decrees or guidelines.


“Your decrees have been the theme of my songs wherever I have lived.”

And actually, we may be inclined to think of it more in terms of a musical theme which defines the work.

For example, take Beethoven's 9th Symphony -- his last completed symphony -- and certainly most famous -- composed while he was deaf. There are four movements -- some heavy and dark -- some light.

Most people, though, only know the fourth movement. The fourth contains the Chorale.

The singers are all standing there for 45 minutes through the first three movements of the 9th symphony. They don’t do a thing. But the orchestra teases them for three movements with references or portions of the musical theme that they’re going to sing. A measure here and a measure there. Then finally -- finally in the fourth movement, when they, and the audience can stand it no longer -- they finally break into the Ode for Joy, starting with a baritone solo. Of course, in German...

The theme runs throughout the whole symphony but reaches it’s fullness in the fourth movement. It’s only then that we really see what the music is really all about. And Beethoven then begins to actually unpack the theme. The irony is that even though the theme is joy, 60% of music in the first three movements isn’t so joyful.

Sometimes couples end up with a song which for one reason or another has a lot of meaning to them. And whenever they hear it they crank up the radio. “That’s our song.”

And the psalmist is saying -- or singing -- remember psalms themselves are actually songs -- Your statues -- your decrees -- have become my song -- our song -- the theme of our song -- our theme song -- however you want to put it.

So you’re perhaps thinking, Wow, that’s way cool, thanks for the music lesson -- but tell me again why this is supposed to be important to me. I’m a little dense, connect some more of the dots, please.

Okay, FOUR REASONS WHY THIS IS IMPORTANT:

First, note that THE PSALMIST IS INVITING HIS READERS TO ADOPT HIS SONG. He is modeling the lifesong concept.

And the implied challenge here is, WHAT ARE YOU SINGING WITH YOUR LIFE? Is your song a bunch of fluff in the over-all scheme of things?

Really, no one is going to take the Beverly Hillbilies as their theme song -- their life song, right? It’s amusing, but not so significant.

Of course, something like Beethoven's 9th symphony is closer to significance. It extols the virtues of joy. Some of it is fluff but there is a lot in there that is worth grabbing --

This kiss for the whole world!

Brothers, above the starry canopy Must a loving Father dwell.

Do you bow down, millions?

Do you sense the Creator, world?

Seek Him beyond the starry canopy!

Beyond the stars must He dwell.

Yet, even the 9th symphony is less than adequate. Beethoven, quoting the poet Friedrich von Schiller (that’s who wrote the words to Ode to Joy -- Beethoven just wrote the music -- well, he added some lines to the poem, too. But it was Schiller’s poem.) mentions God but does not fully embrace him.

The poem dances around the idea that God can be distantly known but doesn’t really join in. It’s like sitting outside the concert hall listening to the sounds that drift your way -- and recognizing that something significant is happening there -- but not really going in.

The psalmist invites us to enter in -- and to sing the old song that is life. He is inviting you to join him in making God’s Word the theme song for your life.

The second reason why this idea of the theme song is important is that, THE CONTENT OF THE SONG IS GOD'S REVELATION OF HIMSELF AND HIS AGENDA -- HIS STATUES -- HIS DECREES. AND AS SUCH IT GIVES HOPE!. God is not silent -- he has a theme song.

Many songs give excitement or memories or delight. But the song that is God’s decree comforts and revives people with genuine HOPE.

Are you in need of hope?


49 Remember your promise to me; (of course, God never literally forgets. To remember is to bring the memory to bear on the situation.)... Remember your promise to me; it is my only hope. 50 Your promise revives me; it comforts me in all my troubles. 51 The proud hold me in utter contempt, but I do not turn away from your instructions. 52 I meditate on your age-old regulations; O LORD, they comfort me. 53 I become furious with the wicked, because they reject your instructions. 54 Your decrees have been the theme of my songs wherever I have lived.

The dude has got problems -- real problems -- but he finds hope by remembering his theme song.

The third reason why the theme song is important is -- THERE IS A DYNAMISM TO HAVING A SONG.

Music engages not only the mind and body but also the imagination.

Someone once complimented a violinist after an incredibly successful concert. “That was an amazing piece of music. Could you explain it to me?”

Her reply was, “If I could explain it I would have not needed to play it.”

Music engages the imagination. It is dynamic and alive.

For the psalmist, the decrees of God are alive and very partial toward him. It’s his song -- his connection to God.


54 Your decrees have been the theme of my songs wherever I have lived. 55 I reflect at night on who you are, O LORD; therefore, I obey your instructions. 56 This is how I spend my life: obeying your commandments.

And that’s the fourth reason: A GOOD THEME SONG IS PARTICIPATORY. It is sung by doing -- that is, by “obeying.”

For the psalmist, a theme song isn’t something you hear on the radio or at a concert. It is sung.

You know how when you go to some concerts everyone knows all the words to the songs -- they stand as a the band plays -- they sway to the music -- or jump up and down -- all the while they’re singing along.

A GOOD THEME SONG IS PARTICIPATORY.

If I had to choose an actual song as a theme song for the filming of my life I think it would be one that I learned in Sunday School.

It was written in the gospel era of hymnology -- latter 19th century -- an era I’m not particularly fond of musically. And the tune itself leaves a bit to be desired. It’s not my favorite song. But there are many many mornings when I wake up with this song running in my mind.

But what if I said that it was my theme song but I never told the story? What if I just liked the sound of the song? No, it becomes a real theme song when we participate in it -- when it becomes a part of who we are and we join in with it.

That’s one reason why the Addam’s Family can’t ever be my theme song -- even if I thought Cousin It was a clever character.

So, the question is, what is your theme song? Are you willing to join the psalmist in making God’s Word -- his decrees -- his message -- the theme song for your life?

Jesus is the message -- the fullness of God’s decrees and word -- the new law -- the new covenant -- the new song.

In the 70’s Calvin Miller wrote an epic poetic narrative called the Singer. In the poem Jesus is portrayed as both the singer and the song. At the risk of being highbrow -- Beethovan, uke, Gilligan’s Island, and now poetry...

I want to read for you the last section -- the dark and songlessness of the post crucifixion morning.

Two women, including the mother of the Singer, have gone to look for the madman, who had earlier been made sane through the song of the Singer, but at the death of the Singer had reverted into madness. 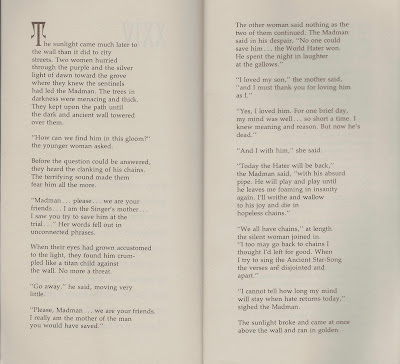 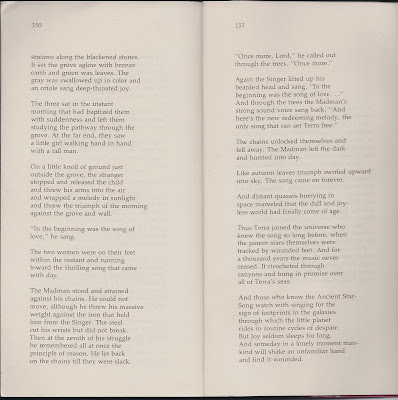 Posted by Brad Boydston at 9:52 PM

Search by scripture passage
or topic using the Google bar above.